Attempts at acquiring a new skill. 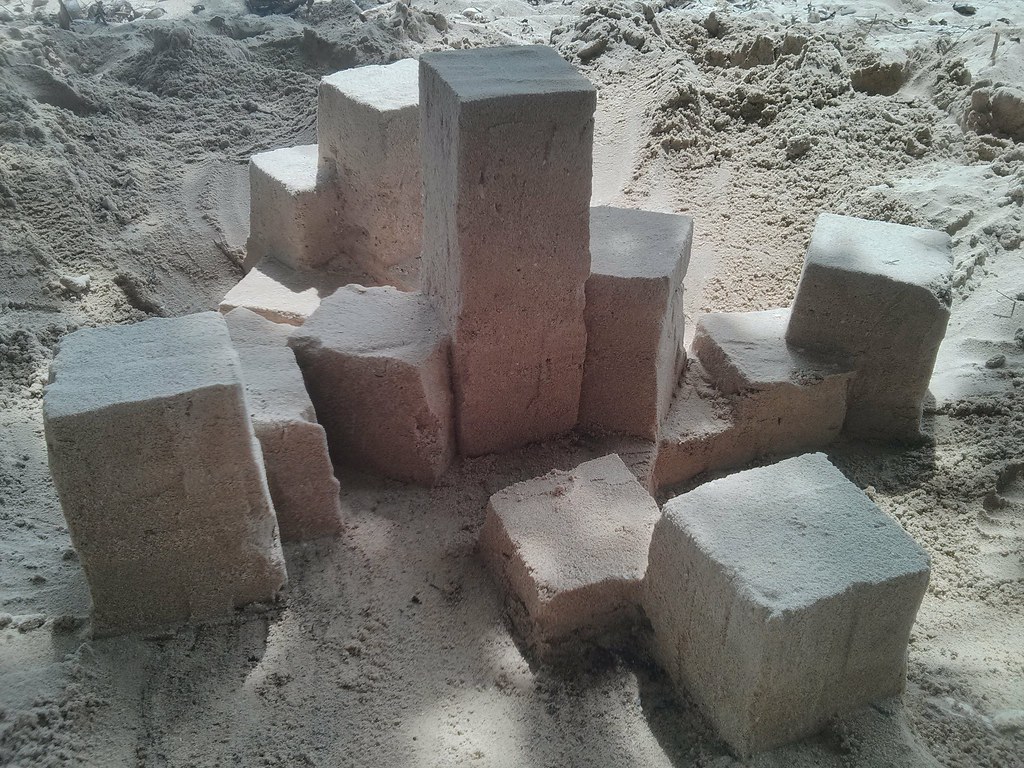 Inspired by the god of sandcastles Calvin Seibert. ​

Here at the ​Department of Amphibological Research​, our primary studies are in the equivocal interpretation of the natural world. While on Ko Lon, we used technologically aided misidentification techniques to discover a host of ambiguous new species on the island. However, we became especially fascinated with one particular animal: the hermit crab (Fig. 1).

Hermit crabs in Ko Lon are not difficult to spot: lay still on the beach for more than a couple of minutes and you will soon notice some shells crawling around you. We immediately fell in love with the little crustaceans. Maybe because, unlike most animals, they are so easy to catch and play with: delightful toy-sized robots of nature. Maybe because their mismatched shells gives each one of them a slightly goofy and unique look. Whatever the reason: we started asking ourselves some amphibological questions: is it possible that the different shells reflect different aesthetic preferences and personalities? Or ​vice versa:​ can the chosen shell affect the crab’s attitudes and behaviors? The field seemed ripe for some crab misunderstanding, but we didn’t know how to tackle these important questions.

Then, early on during one of our explorations – when the sand on the beach was still undisturbed by Dinosaur tracks – we noticed the intricate imprints left behind by the hermit crabs (Fig. 2). Rambling and asymmetric, they came in so many different sizes and shapes, almost as varied as their shells. We therefore speculated that the tracks may provide a window into the personality of the crabs. To test this hypothesis, three experimental protocols were designed and performed between July 8 and July 10.

1. Sand – The most obvious first step was to attempt to record the crab tracks directly on the original inspirational medium: sand. However, we needed a way to record crabs behaviour in a controlled environment, one crab at the time. We proceeded to dig a more or less rectangular arena (Fig. 3A), high enough to prevent a medium sized crab to escape (which some passersby delightfully misunderstood as a crab-fighting pit). We then proceeded to place in the arena 3 separate crabs, with notably different shells, letting them free to wander around for a couple of minutes each and took pictures of their tracks (see Fig. 3B). However, this first method was not satisfying for two reasons: the most extravagant crabs emerge from their burrow toward dusk, which meant that the lighting conditions on the beach were far from ideal at the time of the experiment. Also, the crabs instead of wandering around were mostly trying to escape, slowly demolishing the walls of our arena. Soon enough we decided to fold up the Crab Lab #1.

2. Paint – Although less faithful than sand tracks, paint provides a much more durable and easy medium to record the crabs crawling. We first experimented with some blue acrylic paint, to see if the crabs were comfortable with this medium. Protected by their exoskeleton the crabs didn’t seem to mind having their legs dipped in blue paint and we were extremely pleased with the results (Fig. 4A). We therefore proceeded with more elaborate experiments, completely disregarding our original plan to record each crab individually. The painting in Fig. 4B was produced by letting an indeterminate number of crabs, randomly sampled from our surroundings, wander around as long as we pleased.

We later got over our excitement and returned to our original goal: we collected 3 crabs (Fig. 5A) with distinctive shells and let each one of them paint for a couple of minutes with a different color on sheets of papers of equal size (NOTE: each crab was arbitrarily moved around at random locations whenever the crab got fixated on a corner – more often than not). Overlapping the separate channels (Fig. 5B) clearly reveals very different levels of craftsmanship and artistic sensibilities.

Crab A (blue) has a bold sensibility with rational, linear strokes. There is a sureness and sophistication to these graphic, directional lines, evoking a flowing river or receding tide.

Crab B (red)’s work takes a more tentative, thoughtful approach – its mark making has an impressionistic quality with a cross-hatched layering effect – describing dimensions of an unknowable form.

Crab C (yellow) took a more playful approach, her work recalls the graffiti like scrawls of a young Cy Twombly. The claws here have a freshness and immediacy that show great promise.

3. Light – Late on the last night of our residency after a hard day in the lab, we thought the crabs could use a little fun. We teamed up with Andy and Chris to create a final, light-based experiment. We temporarily attached colored LED lights to different crabs and allowed them free (more or less) to chart their own courses. First in a confined environment in the house (Fig. 6A) and later completely unbounded on the beach (Fig. 6B). Of course, this technique did not allow us to record the tracks of the crabs in any detail but it had several other advantages: 1) LED lights were more durable than paint; 2) it allowed us to study crabs in the dark and we were in a hurry; 3) it looked pretty damn cool!

We actually had 6 (maybe 7?) crabs in our initial trial and unfortunately LED lights could only be set to 3-4 different wavelengths. This meant that we had crabs with completely different shells wearing the same colour, which completely confounded our results and did not allow us to unequivocally associate specific crabs with their tracks, but to be honest we didn’t much care anymore.

In conclusion, based on our poorly-designed and shoddily-performed experiments we can firmly reject the null hypothesis (based on pure self-confidence): hermit crabs are not just simple arthropods made more relatable to the human eye by their mismatched shells. We argue that these crustaceans exhibit unique personalities and advanced artistic sensibilities, revealed only in part by their choice of shell and crawling behaviour.

Future directions. These experiments, as well as recent reports by Minsky et al. 2018, show that there is great under-appreciated art potential in hermit crabs, and arguably in crabs of all species. Indeed, in the following weeks, while exploring other tropical beaches we came across many interesting sand markings left by other kinds of crabs. Not only do crabs produce elegant tracks when they walk but most of them burrow during the day, producing further patterns of great interest. Here are only two examples: the Ghost Crab (Fig. 7A) besides looking extremely badass, also creates these comet-like shapes around their burrow (Fig. 7B). The elusive Sand Bubbler Crab (too small for us to take a good picture), builds delicate constellations of tiny sand balls (Fig. 8). Finally, take a look at these crazy snails which we met on our last day in Phuket going round and round in celtic-looking tracks (Fig. 9). This will no doubt provide inspiration for many years of amphibological studies.

Practical applications. Beyond their aesthetic value, there is considerable potential in crab-inspired designs and tools. As a proof of concept, our in-house designer studied the individual crab markings and processed these into a series of digital brushes (Fig. 10A) – available to download at this link -which she then used to compose a meandering, infinitely repeating pattern (Fig. 10B). Some fabric prints have been tested and we welcome suggestions for further artistic and commercial applications.

The Best Thing about Dinacon
You work
get hot
maybe frustrated too
and then
take off your clothes
and swim in the ocean.

The Second Best Thing about Dinacon
Sitting on the porch
crochetting plarn
listening to friends talk
about why we’re all here
and why we’ll all come back
together again.

but let us not expect
too much too soon
let us become great listeners
observers, smellers, touchers and feelers,
“amazing” organs
of a loving -ism.

The Least Best Thing about Dinacon
Were we just flirting with nature?
making believe
that it is on par with our art science technology mix
the cocktail that keeps us going
producing knowledge
and plastic. 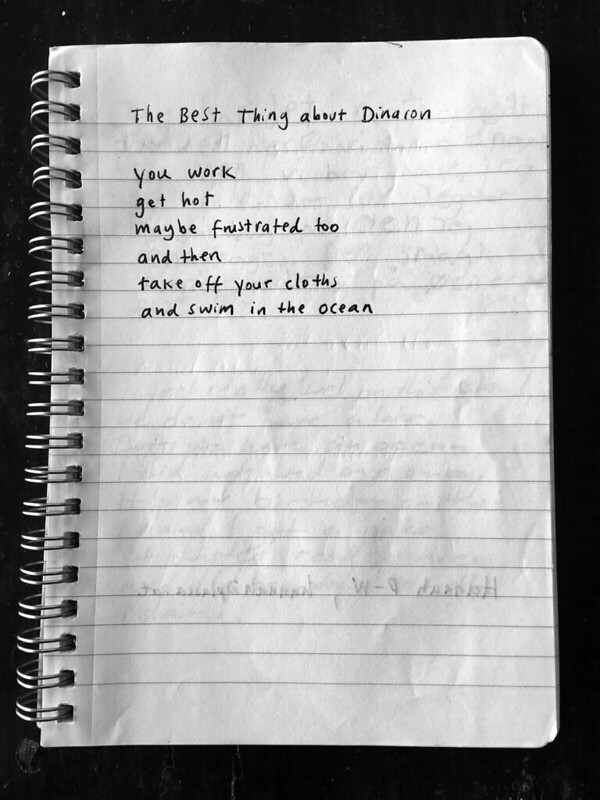 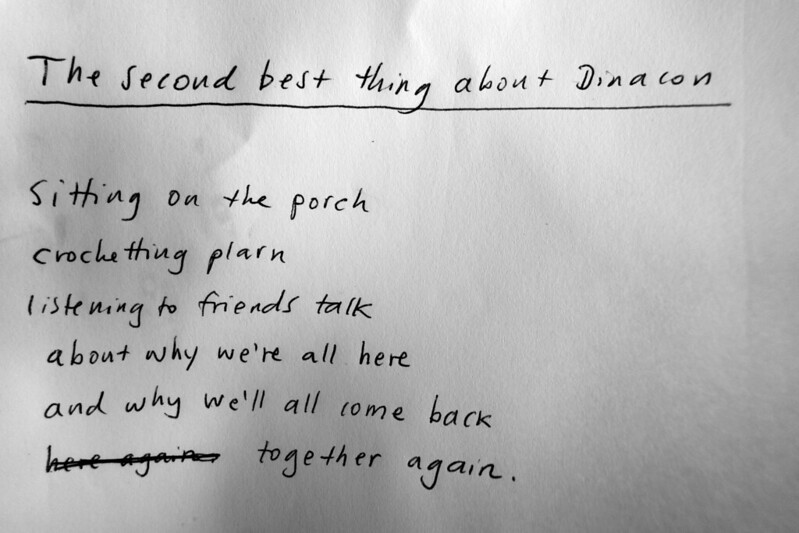 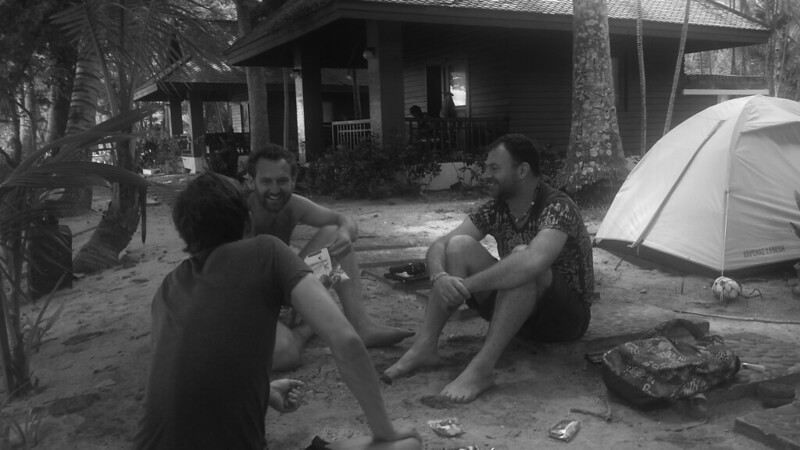 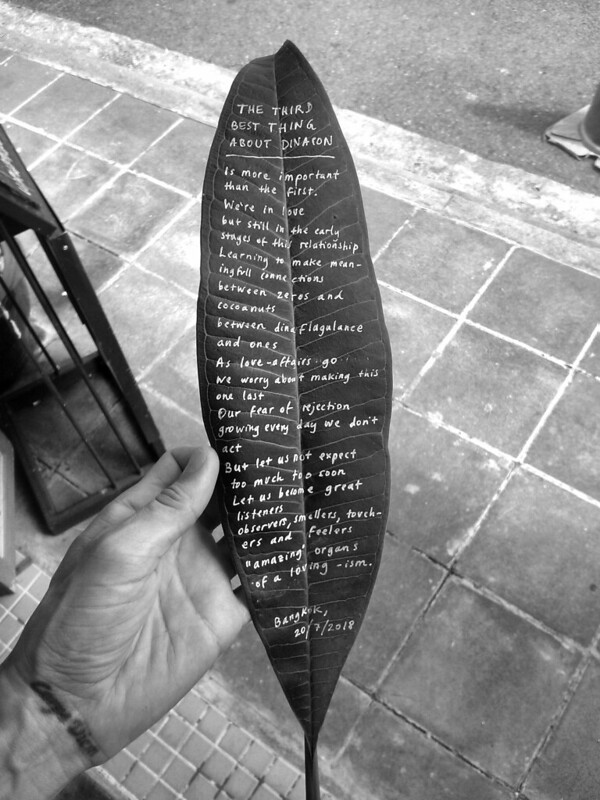 Tidal Memories is an interactive, environmentally-informed visualization of photos posted to Matrix (Riot) during Dinacon. It displays photos taken during Dinacon, on a representation of the intertidal zone in front of the Dinacon site in Koh Lon, Phuket, in Thailand.

The live site is here.

Photos are positioned vertical along the intertidal zone, according to the tide level when they were taken (or, at least, posted to Riot).

Some memories are covered by the water. The tide level indicates the current tide in Koh Lon. At high tide, you won’t see much.

Mouse over a photo to see its details.

Here are photos at high and low tide, of the intertidal zone in front of the Dinacon site.

If you have your audio turned up, you may be able to hear waves. These were recorded on site.

During (part of) Dinacon, the display brightness was keyed to an on-site light sensor. During night (and when severely overcast), the image would fade to black; during twilight (and when slightly overcast) it would darken. The current display doesn’t attempt to simulate this, since doing so would render the display unusable during much of the Western hemisphere’s waking hours.

Matrix is an open network for decentralized communication. Riot is a set of clients (web, desktop, mobile) for viewing and posting to Matrix chat rooms. During Dinacon, participants posted images to Matrix (Riot), as well as to Twitter and Instagram.

The code consists of a scraper, that reads the photos from Dinacon’s Matrix rooms; a web client, that displays the scene; a micro:bit program that sends ambient light data to a connected computer; and a Python script that relays this information to the cloud where it can inform the web display. The web client is written in JavaScript, using React, Redux, and SVG. The micro:bit code uses TypeScript. The remaining code is in Python, using Flask for the web server. The system uses Mongodb to store Matrix message and image metadata, AWS S3 to store the images themselves, and websockets to propogate the environmental information from an on-site micro:bit to the display. The API server is hosted on Heroku; the web client is hosted on Netlify.

The source code and installation instructions are here.

Matrix-photo-gallery is a more conventional photo gallery for Matrix (Riot) rooms. I wrote it as a debugging tool, along the way to this more artistic rendition.

Matrix-archive uses similar code to grab photos and chatroom transcripts from Matrix. It was created for use by the documentation team.